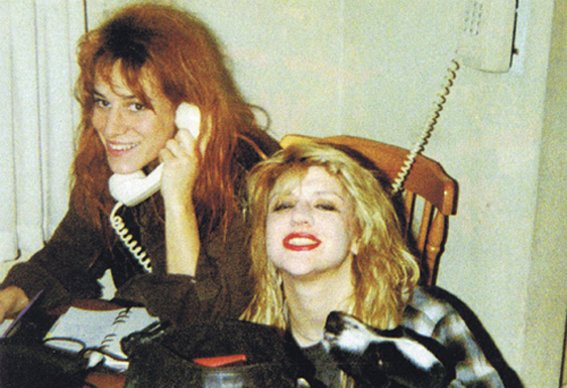 It’s almost Christmas, 1988. I am sitting in my home in Los Angeles in front of a hand-decorated package my friend Courtney Love just sent me. I already know what it is. Courtney left L.A. a couple of months ago for Portland, Ore., and is working at an indie record store. I had just gotten off the phone with her when her gift arrived. Usually when we are in different cities we sit on the phone for hours talking about boys, our lives and the Britpop stars we are infatuated with. This call was different. She told me about a new, exciting music scene up in the Northwest. She sent me some records from her store of these new bands. She called to make sure I’d gotten them.

It’s gloomy outside. It is gloomy for the L.A. music scene as well. In 1988, if you like alternative music, all you can see are either bands in the cow-punk scene or rock groups hoping to breathe the exhaust left behind by Guns N’ Roses’ success. The hardcore/punk scene, which was active only two years ago, has died off completely. Pay-to play, a scam where bands have to play the clubs to let them play their music, is the standard. L.A. is not the place to breed a healthy alternative scene. There is nothing to be excited about. I am in L7, and Courtney is still trying to put together a band. It is looking bleak for us both.

I open Courtney’s gift. Inside are three 12-inch albums, all Seattle bands and all on labels I have never heard of. The cover art strikes me first–mostly black-and-white, live photos. Awesome. The music is even more exciting: Nirvana’s Bleach, Mudhoney’s Superfuzz Bigmuff (Glitterhouse release) and Green River’s Rehab Doll. It is now clear that the Northwest is happening. So L7 heads north to find this place where we can be part of the movement that seems like a true alternative and makes sense.

Jump ahead to New Year’s 1990. L7 has just played a sold-out New Year’s Eve show in L.A. Eric Erlandson–Courtney’s boyfriend and guitarist for her new band, Hole–and I decide to stay up and watch the first sunrise of the new decade. I know a cool spot in the Hollywood Hills where we have a view of the entire city. We sit for hours talking about the upcoming decade, how great it is that L7 can sell out the 400 capacity club and how it would never have happened pre-1990. L.A. is really starting to pick up. It seems to us that, finally, enough people are interested in alternative music to support a couple of great indie labels, an indie radio station and a couple of local fanzines. We fantasize about how great it will be if bands like Nirvana, Soundgarden, L7 and Hole can take over the commercial ranks from dorky bands like Motley Crue, Poison and Guns N’ Roses. We talk about change not just for music, but for politics and women. We hope everything will be better in the ’90s.

The sun rises and we go to a Mexican restaurant on Sunset Boulevard. We collapse into our booth, and Eric Signals me to turn around. I look behind me to se Slash and Axl of Guns N’ Roses eating tortillas! We both start laughing. To this day I wonder what they talked about, how they felt about the decade to come.

The next seven years are mad. L7 goes from selling out 4,000-and-up venues. We play 40,000-capacity festivals, and seems like all our friends from the Northwest are doing the same. Record companies are running scared, realizing they’ve been blindsided by the tidal wave. They hire new blood, fire those that are not “hip” enough and sign every “alternative” band they can get their hands on. This includes Hole and :7. Middle America seems finished with cheesy, watered-down rock and wants something “alternative.” And the shift extends beyond music: After almost two decades of political passivity, Americans elect a Democratic president and start supporting equality for all races, women and gays. Many bands also back progressive political causes by doing benefits. Things seem to be changing for the better.

It’s almost Christmas, 1998. Courtney and I are on the phone again. I sit silently as she tells me many major record labels, including hers (Geffen) and mine (A&M), are shutting down. Both of us will be inconvenienced by this, to say the least. We each have records to release and work to do.

In 1997, after leaving L7, I helped put together a new band called OtherStarPeople. I love being in this band. We have had great fun touring and recording our first album, but we are in limbo, waiting to find out if the record will be released or not. When we signed our deal at A&M. we did not foresee the coming changes. The consolidation, as one by one labels are sold to conglomerates who then shut them down or merge them with other companies. Nearly 3,000 people from these labels are about to lose their jobs and 200 bands will be dropped. Major commercial radio stations have gone back to the “same 20 bands played over and over” format. Large alternative concert series have started losing money and will eventually stop. Cool magazines have folded, the number of political concerts has dwindled, and progressive political issues are once again losing ground. Most new bands are being fronted by aggressive, middle-class white boys. Again! Paying-to-play is even making its way back to the L.A. clubs. It almost seems that what happened in the ’90s was no more than a fluke, a glitch in the tape.

It is gloomy once again. Well at least it seems that way at the moment. If there is one thing I have learned, when one thing rises, another will fall and another yet will rise again. This makes me happy–it keeps life interesting. Although at times it has truly depressed me that OtherStarPeople have been caught in the riptide if this “changing of the guards,” I think we have maintained a good perspective and know not to let it keep us down. As for the next big thing, I believe it is the technological movement that is changing how we obtain and enjoy music. This flux is the real reason there is so much madness going on in he music industry right now. So we have to see our way through these growing pains. And any day now, as Courtney and I discuss the men in our lives, politics and our current obsessions in our private internet chat room, we may stop for a moment, hit a few buttons and easily exchange high-quality MP3s of some of the bitchin’ new bands we love. Bands that may just be the next to rock the world.