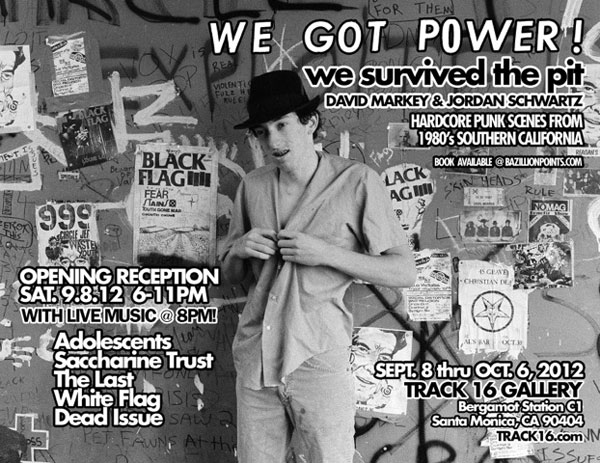 A photograph I had taken of skateboard legend Tony Alva playing bass in his hardcore band Skoundrelz, was included in the very cool collection of photographs and essays by my childhood friends, Jordan Schwartz and David Markey.

Both, Schwartz and Markey have contributed to the music scene, specifically the hardcore punk scene, in Southern California by way of producing fanzines, documentaries, radio shows, artwork, promoting live punk shows, playing in bands and more.

If Dave’s name sounds familiar, he went on to do some very interesting, experimental and amazing video productions as a producer and director.–  (Dave Markey IMDB), which include: The Year Punk Broke, The Reinactors (watch it on Netflix), Desperate Teenage Love Dolls, and so many more.

If you are thinking you would like to buy the book, here is the link:
We Got Power!: Hardcore Punk Scenes from 1980s Southern California [Hardcover]
David Markey (Author), Jordan Schwartz (Author)